The Bam citadel is the largest brick structure in the world, located near the city of Bam in the province of Kerman in southeastern Iran. This huge citadel, registered on the UNESCO World Heritage Sites “Bam and its Cultural Space”, is located on the Silk Road, built in the 5th century BC and continued to be used until 1850.
The historic Bam citadel, with an approximate area of 200,000 square meters, is considered to be the largest collection of masonry brick works in the world.
The whole building is a great fortress that the citadel located at the heart of it, but due to its elegant appearance, which is also the highest part of the complex, the entire castle is called the Bam citadel. This historic citadel consists of several architectural forms including the walls of the fence, the tower and the gates and numerous gates, the mosque, the market, the inn, the caravanserai, the school, the bath, the zurkhaneh and the residential neighborhoods with the houses of the reach and poor people, the governorate including the barracks, the stables and mill, the house of the commander of the army and the domicile of the governor, the four-season mansion and the observation tower.

If we want to visit the Bam citadel, we should definitely be the guest of the beautiful province of Kerman and from there go to the beautiful city of Bam. Bam is located 193 km southwest of Kerman and is located in the Desert between Jabal Barez and the Kaboodi mountains. Bam is 1050 meters above sea level and is 19480 square kilometers. The earliest signs of civilization have been discovered in the Bidron hills, 15 km from the city. In the northeastern part of the city of Bam, on the top and on the slopes of the rock, there were strong fortresses, called people as citadel. In fact, this great building has been the old city of Bam. Around the castle there were deep trench that protected the citadel from the onslaught of enemies.

The area of this citadel is nearly 180,000 square meters, surrounded by walls 6 to 7 meters high and 1815 meters in length. The citadel consists of two separate parts, each of which has its own characteristics. About 67 towers have been scattered throughout the ancient city of Bam.

Architecture, design and manufacturing of citadel

The Bam citadel in fact is a huge fortress located in the center of the citadel. The materials used in its construction consist mainly of adobe, malate, bole and straw, and in rare cases part of stone, bricks and trunk of palm trees. Perhaps because of the huge building of the citadel, which is also considered to be the highest part of the complex, they have named all this monument to the Bam citadel. The most important points about the architecture and construction of this brick-and-concrete structure are two parts of this huge collection: Government sector and peasantry sector, with their own unique characteristics. The governorate includes parts such as the military fortress, the four-season mansion (this mansion consists of three floors and a state palace where all the commands and rules of the city and its functions were ordered at that time by the ruler), barracks, water wells with a depth of 40 meters and The stable that holds 200 horseheads.
The design and architecture of the citadel have been studied in various aspects. Regarding the present appearance of the citadel, it can be said that the designer or designers had foreseen the final shape of the whole building and the city from the first step of build this construction. During each of the stages of development, the fabrication of the part is made in a perfect shape, and each additional part can easily be adding to the existing parts. The citadel is located in the center of the military city at the best security point.
The government sector is located in the inner walls of the military fortress, the four-seater mansion, the barracks, the 40-meter water well and the stables of 200 horses. 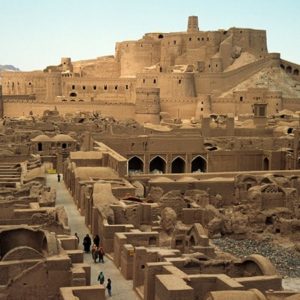 The peasantry district that surrounds the governorate and includes the main entrance of the city, the main link of the entrance to the castle and the market along it, is about 400 houses and have public buildings, such as school and sports facilities.
Among the houses there are 3 different types that are noteworthy:
– Smaller homes with 2-3 rooms for poor families.
– Larger houses with 3-4 rooms for the middle class community, some of them have a porch.
– The most luxurious houses with more rooms, which are located in different area for different seasons, with a large yard and a nearby stable for animals. The number of these houses in the citadel is very low. we can mention the Sistani house and the Jewish home in bam city.
All the buildings in these ancient works are made of bricks that are not baked in Furnace, known as adobe, and this is one of the reasons for the famous ancient castle of Bam, which is known as the world’s largest brick-and-adobe structure. Inside the castle, winders were built that used them to direct the wind inside buildings and citadel. Of course, during the warm season of summer, laver water was used to cool the houses, which also destroyed the dust. It is interesting to know that each windmill was selected and used according to the size of the buildings and houses located in the Bam citadel. For example, for smaller mansions than single-hull wind catcher, and for larger buildings and buildings that were more important than other buildings, they used quadrupole wind catchers. This would allow them to direct the wind in different directions in the house. In the Islamic era in the Bam citadel, two mosques with the names of the Jame Mosque and Mosque of Prophet Mohammad and Hosseinieh, which include a courtyard, a two porch, which are exactly mirroring each other, and several rooms, was built. The three pillars made of clay are also prepared in the hosseinieh. Another interesting point to be said about the architecture of the Bam Citadel Collection is the presence of an entry to enter the citadel, which, according to its entrance arch, can be attributed to the construction of the Sassanid era.

When the entrance gate of the city was closed, no animal or human could enter. Residents could live their lives in long periods because they had access to water wells, gardens and domestic animals inside the citadel. When the military city was built, the inhabitants could stay in the city and the soldiers could defend it because the citadel was enclosed by tall walls and towers.

In addition to the view of the guarded towers and vertices decorated with the high walls of the castle in the horizon, the wind catchers of this building are very magnificent. wind catchers are exterior structures of buildings that are used to get wind and direct it to buildings. Sometimes, in the wind direction, they build laver water so that it cools inside the building and drops the dirt and dust. 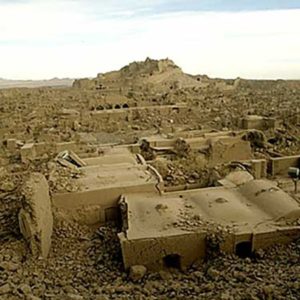 The 2003 earthquake in Bam, destroyed more than 80 percent of the citadel. As a world heritage of the world, many countries participated in its rebuilding. Japan, Italy and France were among the countries that initially co-operated. Japan contributed about $ 1.3 million to Iran for reconstruction, and supported the project by sending equipment and creating a 3D plan from Bam to improve the accuracy of the renovation. The Italian Heritage and Cultural Heritage Department also contributed to the restoration of the historic citadel by implementing a project with a budget of around EUR 500,000 for the restoration of Tower No. 1 (in the southwestern corner of the periphery of the historic city). The project, completed in collaboration with a group of Italian and Iranian experts, ended in the summer of 2011. France contributed to the preparation of the Bam with preparation of map to Iran. The World Bank also contributed a lot of money to the project, Iran’s Bam citadel is severely damaged after an earthquake a decade ago and has since been put on the list of works at risk. But due to improvements over the past years, the UNESCO Organization in May 2013 removed the Bam citadel from the list of in danger works.

The main gate, the market, the Tekyeh square, the mosque of Barzag, Mirza Na’im complex, the small mosque, the caravanserai, the Zurkhaneh, the citadel bath, the Hesar II gate, the school or the Khanqagh, the stables, the castle, the place of the wind catcher, the ruling house, the four seasons, the main well, the remains of the old neighborhood, Kenari neighbor or Gholam Mahal, the gate of the Ket-kerm and the jail.
The Bam Citadel and its city are among the most important and historic military fortresses. Inside the castle of the ruling mansion was built on a natural rock that had 5 floors, all of which consist of clay and brick. The remains of the columns and arches in the castle of Bam, bakery shops, oiling and adorning shelves in the castle market showed its past boom. Bam citadel is a complete example of Iranian architectural technique.
The building is made up of mud, bricks and clay, and is the largest bricks building of the world and one of the most beautiful buildings in the Parthian era. Bam city is attributed to Bahman’s son Goshtasp. People lived in the citadel until about two centuries ago. During the history of the Bam Citadel it has been repeatedly raided and rebuilt.
Some houses have a private bathroom, and along with a number of them, they have built stables apart from their living space. Some of the houses in the citadel, regardless of the strength and bearing of the columns, are made of 2 floors.
The people of Bam were living with agriculture and carpet weaving. From the second gate we can see the governors sector part of citadel that citadel located above the mountain.

Share6TweetShareSend
No Result
View All Result