Share on FacebookShare on TwitterShare on TelegramShare on WhatsApp

Sadr al-Din Muhammad b. Ibrahim b. Yahya Qawami Shirazi (ca. 1571–1636) is arguably the most significant Islamic philosopher after Avicenna. Best known as Mulla Sadra, he was later given the title of Sadr al-Muta’allihin (Master of the theosists) for his approach to philosophy that combined an interest in theology and drew upon insights from mystical intuition. 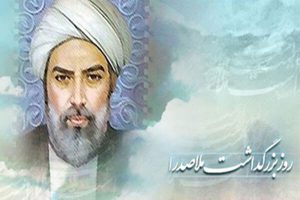 He was a student of Mir Damad and Baha’ al-Din al-‘Amili. His best-known student was al-Fayd al-Kashani. Mulla Sadra was the founder of the influential philosophical school known as the Transcendent Wisdom or philosophy—the third main philosophical school in Islam. He elaborated his philosophical system in the book, al-Hikma al-muta’aliya fi l-asfar al-‘aqliyya al-arba’a, known as al-Asfar. This is his most important and influential work. The rational tradition of Shiite Muslims was remarkably influenced by Mulla Sadra’s doctrines. Many subsequent Shiite philosophers, such as Mulla Hadi Sabziwari and ‘Allama Tabataba’i commented on, and illustrated, his philosophy. The fundamental principle of his philosophy is the Principality of Existence. His theory about the manner of the bodily resurrection led to controversies.

Mulla Sadra lived in Shiraz, Isfahan, and Qom. In addition to philosophical works, he also wrote some works concerning the exegesis of the Quran and the interpretation of Usul al-kafi.

He was born in 979/1571-1572. His father was Ibrahim b. Yahya al-Qawami. Mulla Sadra spent whatever he inherited from his father on his studies.

He studied the preliminaries under his father in Shiraz. When his father died, he moved to Isfahan—the then Safavid capital with flourishing seminary schools. He studied philosophy and other reflective disciplines under Sayyid Muhammad Baqir Mir Damad (d. 1041/1631) and traditional disciplines (such as fiqh and hadith) from Baha’ al-Din al-‘Amili (d. 1030/1620). He received permissions (for teaching and other positions) from the two teachers. He must have been of a distinguished academic ranking when he moved to Isfahan, because he immediately attended Baha’ al-Din al-‘Amili’s courses.

After his studies in Isfahan, Mulla Sadra returned to Shiraz where he taught in Khan Seminary. However, he was offended by some scholars in Shiraz. So he left Shiraz to Kahak, a village around Qom, where he was isolated from people for years. After this, he started to write his works and establish his own philosophical school until his death. According to some sources, he spent the last years of his life in Qom.

Mulla Sadra’s academic life can be classified in three stages:

He chose to isolate himself from people and scholars, spending his time worshiping God in some mountains in Kahak near Qom. The isolation took about 15 years. He was only engaged with worships and asceticism all these years.

He wrote many of his books and essays. The first book he began to write after a long period of isolation was al-Asfar; it seems that he had already started writing the book during the isolation period. Before writing this monumental book, he had already written some short essays. Al-Asfar counts as the foundation of all subsequent works of Mulla Sadra.

Share2TweetShareSend
No Result
View All Result